Posted on June 1, 2014 by conditionbronze 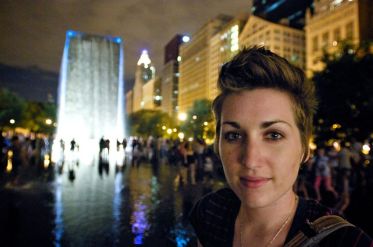 THE LONGEST RUNNING POETRY SLAM IN NORTHERN CALIFORNIA!
Bringing you some of the best poetry from across the world, every week, since 2000.

This Wednesday, the Berkeley Slam is excited to bring you the incredibly talented Carrie Rudzinski!

Come sign up for the slam and get points to qualify to compete at Berkeley’s IWPS finals in the fall!

Your host for the night will be Jaz Sufi!

Named “Best Female Poet” at her first national poetry competition in 2008, Carrie Rudzinski has since performed her work across the United States, New Zealand, Australia, and India. Ranked 7th in the world at the 2013 Individual World Poetry Slam, Carrie also placed 14th at the 2011 Women of The World Poetry Slam and 2nd at the 2011 Underground Individual Slam at NPS. Her work has been published in such collections as Words Dance, Muzzle, OnMag, Catalyst, and Alight. Her most recent book, The Shotgun Speaks, was published in 2013 and is available on Amazon.